Tough times for Montana families are showing up in the form of substance dependence. In pregnancy and the first year of motherhood, this is referred to as perinatal substance use disorder. Substance use disorder (SUD) is a disease that affects a person’s brain chemistry, leading to an inability to control their use of a substance such as alcohol, legal or illegal drugs, or medications. There is no question that using alcohol and drugs when pregnant is harmful to a developing child. So, why is this happening and what can we do to help?

Oftentimes, the reasons for use are linked to pain and stress from childhood trauma and loss. Many women who struggling with unhealthy substance use are accustomed to loneliness and shame, feelings that are common in new motherhood. But our belief is that the opposite of addiction is connection.

We hope to change the paradigm and give providers the language and skills to engage with moms struggling with substance use. When moms seek care, meet them with compassion. Never underestimate the power of one kind interaction. It could change a life… maybe two.

Rates are on the rise for drug overdose, alcoholic liver disease, and suicide. Referred to as diseases of despair, these conditions are often the result of feelings of hopelessness, believing that you don’t matter, anxiety, and pain from trauma. These diseases affect moms, too. Drug overdose and suicide combined are the leading cause of death in the year following childbirth for new moms.

Depression is the number one complication of childbirth, and drug overdose and suicide combined are the leading cause of death in the year following childbirth for new moms.

Training on the topic of perinatal mental health is available in Montana. Use the links below to access a few helpful recordings:
There is a growing body of Montana focused reports and data sources to help us understand perinatal substance use.  Access a few of them below.
The Academy of Perinatal Harm Reduction, in partnership with the National Harm Reduction Coalition, produced a toolkit specific to serving pregnant people who use substances and their families.
We know that social connection is critical to overall health and wellbeing, especially in recovery and in the perinatal period. Talk to your patient about finding groups and peer support near them, including: 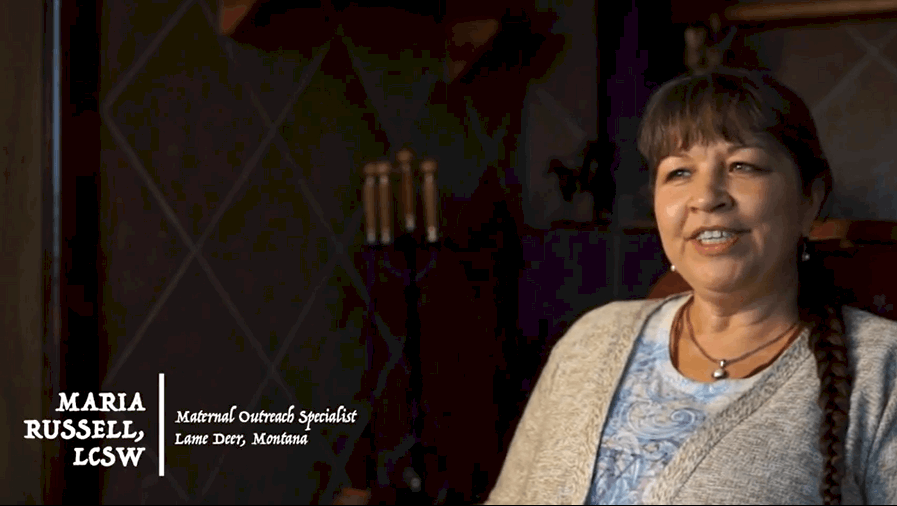 Maria Russell, LCSW, talks about changing the paradigm on how to care for pregnant women on the Northern Cheyenne Reservation. Watch her full interview here.

This work was developed after a scan of current treatment options and messaging, as well as a series of focus groups engaging the target audience, including those with lived SUD experience. The final report, “Gathering the Voices of Perinatal Substance Use in Montana,” is available for reading here.

The images for this campaign can be seen on this page. The mothers featured in each image depict a different situation, including raising children in a tribal community or on a ranch, parenting as a young mother, serving in the military during motherhood, or raising many children at once. This campaign is visible around the state, with imagery targeted to the community where the posters are placed. The media buy includes the following outlets:

New motherhood is often isolating, but feelings of loneliness and shame are even more common for pregnant women battling substance use. Through the LIFTS project, HMHB aims to build community connections for people in the perinatal period. The LIFTS Magazine shares stories of Montana parenthood, allowing readers to connect over similar experiences. And once they’re ready for help, the LIFTS Online Resource Guide provides them with services and family-friendly events to find their community of support.